Posted on October 27, 2012 by fdesaintphalle 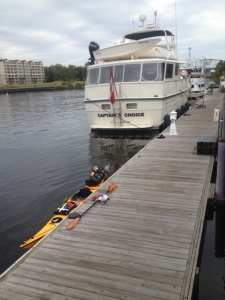 As I opened my eyes in the early dawn, I could see several mosquitoes on the outside screen of my tent, not far from my face.  I watched them fly off and re-land, trying to find a way in.  Beyond them, I could see the small pine trees stretch their short lengths to the sky now lightening up.  This would be a short day, as I wanted to stay at Myrtle Beach, so I had about 13 miles to go to get to one of the last marinas in North Myrtle Beach, where I was told there were lots of restaurants and stores close by, before the ICW goes further west around Myrtle Beach itself.  This would mean another 9 miles or so for the following week.  I decided to get going, so I opened the tent and got everything down as quickly as possible, and brought it all down to Katie to pack all the gear up.  I left my long clothes on until the very end.  The water was close to her stern, so again the tide was moving higher.  I skipped breakfast as is now my habit, usually because it is often cold in the early morning light and I am anxious to get going, but also, because today I would be having my next meal in a restaurant.

I was off AT 8 AM after sending Grace my usual message that I was on the water, and came around the Little River Inlet that crosses over into the Calabash River to my right.  I had only a couple of small rip tides to get through, and soon I was turning west to my left to continue going parallel to the ocean.  The tide was going with me now, and the paddling was very pleasant.  The first real signs of major civilization turned out to be two large Casino ships on the mainland side of the canal where the first marina is located.  Soon, mile marker 345 passed by.  Nixons Crossroads passed by next.  There were commercial fishing boats docked, along with numerous recreational fishing boats leaving in the morning.  It makes a great deal of difference these weekdays versus the weekends.  During the latter, the recreational boat traffic increases exponentially.  There was one time coming down to Wrightsville Beach last Sunday afternoon when I counted three boats going into a river leading to an inlet, two coming out, 3 coming up the canal, and another 4 going down the canal, creating all sorts of waves for me to have to paddle through.  So this paddle Thursday morning was really a delight, with lots of neat views along both sides of the Little River.

From Nixons Crossroads, there are all sorts of highlighted warnings in the guide, on the charts and on signs along the canal about the rock ledges from around mile marker 350.  These ledges are just off the canal, so boats are warned repeatedly not to leave the channel for whatever reason.  In high tide, those rocks are submerged and below the surface and the water looks deceptively wide.  At low tide, those rocks are above the surface, and the channel looks very much smaller.  The challenge for the yachts is that commercial barges also use this canal, and there is just not enough room for both.  According to one boat owner I spoke with, he always checks with the swing bridge masters to determine if there is any commercial traffic moving through.  But in my case, there were none of either, and I had the waterway to myself.  Accordingly, I paddled down the center of the narrow channel, still going with the current.  This was turning out to be a very good day.  5 more miles and I was at the Barefoot Landing Marina, where I parked behind a large yacht (see picture) and waited for Mark, the dock master and owner, to come back from his errands and decide what we were doing.  He suggested to put Katie under a couple of ramps on the lower dock, where he normally stores such boats, for $10 a night.  He called several hotels and got the latest rates, and I made a decision to go to the Courtyard by Marriott.  In a heavy downpour, we packed up my gear that I needed and he drove me 1/3rd of a mile to that hotel.

This was a good day, not a great day, so I rated it a 4.  I had paddled 13 miles in less than 3 hours.  For the week, I did 79 miles in the equivalent of 3 full days of paddling, and with the 14 miles of the ferry/car passed Cape Fear River, the total comes to 93 miles.

Next week is a long trip to Charleston SC, 116 miles.

This entry was posted in Uncategorized. Bookmark the permalink.